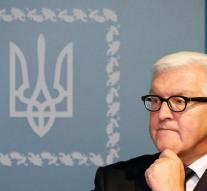 - "The Ukrainian government will lay down their weapons as of Thursday, as the pro-Russian separatists who they are fighting in eastern Ukraine, as promised earlier. That offers a glimmer of hope in the stalled peace process, said the German Minister Frank-Walter Steinmeier on Wednesday visit to Kiev."

"The warring parties want to silence the guns at least seven days. Officially, though a ceasefire in force since the spring of 2015, but which has long been violated to the line after initial success. The rebels and the government tried early September, when the school came to an end in vain to agree a new file. Now seems that succeeded yet."