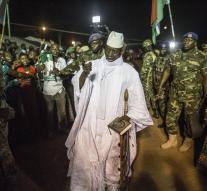 banjul - Shortly before the expiry of the period announced by the ruling party in Gambia to challenge the results of the presidential election in court. The APRC (Alliance for Patriotic Reorientation and Construction) wants the Supreme Court object to the 'wrong decision' by the electoral commission to opposition leader Adama Barrow to designate the winner.

All ruler Yahya Jammeh had initially resigned to defeat, but he came back here on Friday. During the elections would have occurred irregularities. According to the Gambian electoral law can no later than ten days after the elections lodge an appeal against the result.

Jammeh's 22 years in power. According to human rights organizations is the Supreme Court, which is mainly staffed by judges from countries with similar legal systems such as Nigeria and Pakistan, strongly under its influence.