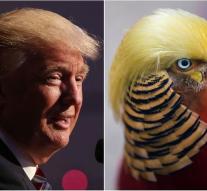 - A photo of a Chinese golden pheasant with a golden crest is massively shared on social media by people who think the bird resembles Donald Trump.

The bird is suddenly in the spotlight after a journalist shared a photo of a golden pheasant from the Chinese zoo in Hangzhou.

Photo collage to Twitter from the golden pheasant and the future president of the United States is food for jokers on the Internet.

Chinese caretaker of the colorful bird hopes the goudfazant will attract more visitors to the park, so he told the Daily Mail.

The internet is also full of celebrities would look like animals. According Bored Panda (click to view 20 images) Vladimir Putin looks like a gray dog, Taylor Lautner on an alpaca and Madonna on a frog.