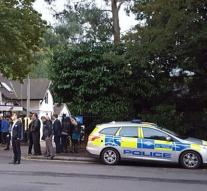 london - A gorilla on Wednesday escaped at the end of the afternoon of his stay in London Zoo. The monkey was caught after three hours.

Employees armed with tranquilizer guns had opened the hunt for the escaped monkey. The gorilla was shot by one of them.

Several visitors to the zoo were trapped for hours in the restaurant for their own safety.