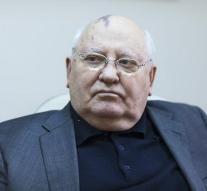 moscow - The former leader of the Soviet Union Michail Gorbachev has denounced for the ceremony in Strasbourg where the recently-deceased German Chancellor Helmut Kohl is commemorated on July 1. Gorbachev told Tuesday that he could not be present for health reasons.

The Russian Prime Minister Dmitry Medvedev goes to Kohl's farewell in Strasbourg. This has confirmed a government spokesperson on Tuesday in Moscow.