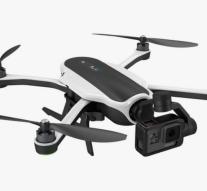 - Camera manufacturer GoPro has returned all copies sold of his new Karma drone because it during operation without power can get stuck. This naturally produces dangerous situations where the device may fall from the sky.

The Karma since October 23 in the United States for sale, but the author now calls on all 2500 copies sold are back. Owners receive the full purchase price back, but there is nothing known again about a possible exchange for a working copy. That probably means that GoPro still not completely out where the problem is or how it should remedy this.

The announcement of the recall will come at a fairly suspicious moment. On the busiest news day of the year in the United States- because of the election- the action was revealed. Unfortunately for GoPro it was still noticed by shareholders: the value of the company decreased by nine percent.