Home / Tech / Google will compete with Skype and FaceTime 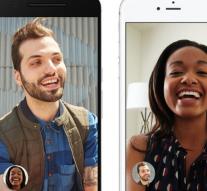 - The new video chat service Duo, which tech giant Google announced earlier this year, the coming days will be available. Duo with Google wants to compete with services like FaceTime and Skype in the already crowded market for video services.

Duo uses numbers and is not associated with the Google Account of the user. This follows the example of Google competitors like Apple (FaceTime), Microsoft (Skype) and Facebook (WhatsApp) who previously used phone numbers to grow.

Another feature of Duo that other services do not have is Knock Knock. Thus get all recipients to see an image of the video before accepting the video call. The app also works with a bad connection, which makes it suitable for use in for example developing countries.