Home / Tech / Google wants to deliver packages in 2017 with drones 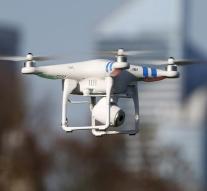 - Google is planning in 2017 to begin delivering packages to customers using drones. It has a top administrator of the US company announced Monday.

According to Dave Fox, who leads the drone program Project Wing Google must in that year on a commercial basis begin deliveries drone. He said that at a meeting of air traffic controllers.

The Internet retailer Amazon plans to deliver packets via drones to consumers.