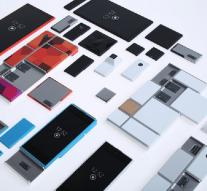 - Google has the power of Project Ara, a phone that users can assemble yourself from different parts drawn. That message Reuters based on two sources. Google wants to streamline hardware projects of the company. Optionally, the developed technologies are currently licensed to other companies.

Ara project focused on developing a fully modular phone where users could choose all kinds of components such as the camera, memory, CPU, speakers or battery itself and easily change. In May, Google demonstrated a prototype during Google I / O, and then announced would also make a series of partners that hardware. This fall would be available a developer version of the phone.

Google began the project in response to the Phone Bloks concept of Dave Hakkens. Who wanted to go with the modular phone waste because not have to replace an entire phone. In the tech world was his concept instantly popular.