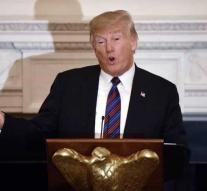 washington - Google search results are not affected for political reasons. Google is aware of this after criticism from US President Donald Trump. He had tweeted that conservative noises would be stopped and that positive news about him could hardly be found.

'' When users enter a search query, our goal is to ensure that they receive the most relevant answers within a few seconds. The search engine is not used for a political agenda and we do not push our results in the direction of a political ideology, 'says Google.

Trump had complained that messages from '' fake CNN '' are prominent, while '' Republican / conservative and honest media are excluded ''. He spoke about '' left-wing media, very dangerous '' and added: '' They control what we can and can not see. This is a serious situation that something will be done about. ''

Google is not the first company to be attacked by Trump. Earlier, he overtly attacked Amazon and its founder, Jeff Bezos. Bezos also owns the Washington Post, one of the most important newspapers in the United States.