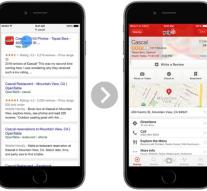 - Internet giant Google will end this month an update by allowing iPhone and iPad users performing a search via Safari web browser, also can be linked directly to an app.

If for example, sought a restaurant that is mentioned in reviews Yelping tops a link that allows the user directly to the Yelp page for the occasion. The possibility does exist for all users of the mobile version of Google's own Chrome browser, but Apple has now made it possible that the technique could be used in the default browser, Safari.

However, the feature works only with people that version 9 of iOs operating system installed.