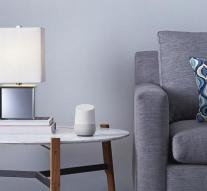 mountain view - Google Home can now be used as a bluetooth speaker. Google announced its support for wireless technology earlier this year, but its actual rollout began Monday.

Now that bluetooth is supported, Google Home can be used in conjunction with virtually any music service in the world. It is also possible to stream music from your own music library to the Home speaker.

In music area, Google has two surprises for home users in store. People in the United States, the United Kingdom and Canada can use Deezer in the short term. The French music service was already used in France and Germany. Another addition is Spotify Free. You no longer need a Premium subscription to link your account with Home.

The advantage of supporting music services like Spotify and Deezer is that you can not only listen to music through the services, but also ask your Home speaker to play specific songs, albums or playlists. If you use a service that is not supported by Google and for which you need to make a Bluetooth connection, you will need to make a selection on your smartphone.

Google Home has not yet been officially released in our country, but it's easy to use if you hit it elsewhere. It is therefore advisable to speak English to your smart speaker. Dutch can not handle the device yet.