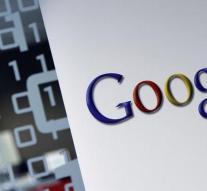 luxembourg - Google is battling the Brussels record to the highest European court.

A spokesman of the European Court of Justice confirms that the appeal has been received. The US internet giant received 2.42 billion euros in June due to the abuse of his search engine.

Internet surfers will first see GoogleShopping when looking for goods and services. As a result, both other providers and consumers are disadvantaged, the European Commission established after seven years of research. The group has until 28 September to adapt that practice.

The company may have been strengthened by the ruling of the EU court on September 6th that Intel's chip manufacturer must be re-examined. Intel received a fine of over EUR 1 billion in 2009 due to abuse of its dominant position in the microprocessor market. That case has to be returned to the Court of First Instance, a lower court of the court, which would not have analyzed all of Intel's arguments at the time.

Monday, the deadline for Google to appeal the decision of EU Commissioner Margrethe Vestager (Competition). She summed up in June that Google is 'ending illegal practices within ninety days.' If this is not the case after 28 September, the company can receive an additional fine of 5 percent of the daily turnover daily.

Brussels is investigating other Google practices. Those running ads and the mobile operating system Android. For example, Google would oblige manufacturers and operators to install apps developed by Google.