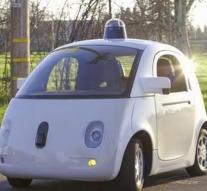 - The self-propelled cars where Google with test since the beginning traveled 2 million miles in 2009 on public roads, or 3.2 million kilometers. That is eighty times around the world. Weekly there is approximately 40,000 kilometers at equal to one revolution around the Earth.

Google's parent company Alphabet announced this Wednesday. ' You have to understand what's on the road and on the side of the road. Every ride is different, '' said Dmitri Dolgov Google after a ride with Reuters.