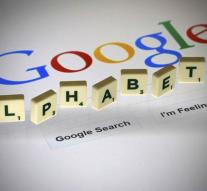 - Google is recently under parent company Alphabet , and therefore, the Internet giant has bought up the whole alphabet at once. The company owns the Internet address abcdefghijklmnopqrstuvwxyz.com . Alphabet now has abc.xyz as address " but we realized that we were missing a few letters ," Google explained on the tech site Recode . It is not known how much Google paid and who the seller is .

The simpler Alphabet.com was not an option. Which is in fact owned by carmaker BMW. The lease - branch also called Alphabet. Alphabet is a collection of all the activities currently covered by Google, such as startup - financier Google Ventures, Health Branch Calicio, device maker Nest and innovation lab X. Google Video platform YouTube and Android operating system remain part of Google daughter. For users, there also does not change anything.