Home / Tech / Google app enables people to do things together 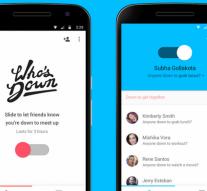 - Google has launched a new app. It involves Who 's Down, an application that helps users to do things together. Moreover, the app is not yet available for download in the Netherlands.

With Who 's Down targeting Google as Tweakers mainly at young audiences. In addition to an e-mail users should also indicate which school they sit. People have to request an invitation to use the app.

The idea is that users specify whether they are available for an activity. Via a chat feature, friends can then get in touch with each other to plan or to agree on. Users can specify in advance what activities they are available.

Google Who 's Down gave a soft launch, hence the invitation system. Probably Google wants to further develop the app first before Who 's Down will be available in all countries.