Home / Tech / Google and Hulu together in virtual reality 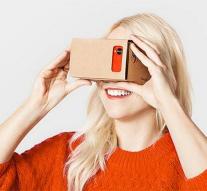 - Google puts hundreds of thousands of dollars each production in a number of virtual reality films and programs. The search giant wants for his new Daydream service, sources have told Bloomberg as exclusive content. Google also will promote projects of Hulu and finance the production of 360 movies with YouTube star.

Daydream is both a store and a software service and the way it should be when people find VR content. Earlier, HTC also announced an app store for virtual reality.