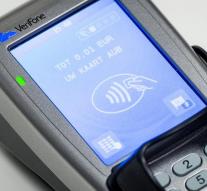 amsterdam - Collectors can no longer be cut off with the hassle that the resident has no cash at home. A group of 21 charities collectively invests in five hundred collecting buses with a built-in ATM, which can be contactlessly paid.

As a result, they will enable contactless donation with effect from 3 September in provisionally fifty municipalities, although old-fashioned money can also be stopped in the customized collection. The new style collectibles will be presented on Thursday 31 August at the Olympic Stadium. Among other things, KWF Cancer Control, the Heart Foundation, the Diabetes Fund, Amnesty International and Jantje Beton participate in the project. The collection buses now rotate between the charities, so that the collaborative organizations can save costs.

The charities thus aim to modernize the mode of collection, according to a spokesman for I Care Productions (ICP), involved in the introduction. In addition, the number of contactless payments is growing stormy: in 2014 there were only 8.3 million contactless transactions, last year 630 million. In 2016, in the Netherlands for the first time there were more pin-on cash payments.

Almost three quarters of the households experience the collector as positive, but at the same time, the good thing is that many people nowadays have no change in their home.

According to the charities, safety and anonymity are paramount in this new form of collection. The collectibus can only be used by charities with a CBF certificate.