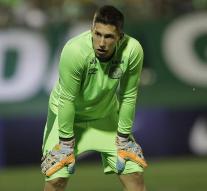 - The day after the air crash with the Brazilian club Chapeco Armenian aboard the investigation into the cause of the accident continues. The crew reported minutes before the crash electronic problems. The possibility that the unit of fuel came down, is examined.

The survivors- three soccer players, a journalist and two crew members- are located in local hospitals and are in bad shape. The right leg had to be amputated Follmann goalkeeper, defender Helio Neto is in intensive care with serious injuries to his skull, lungs and chest. Alan Ruschel, also a defender underwent surgery on his spine.

'When air disasters you know that survival is almost zero. So it's a miracle he's still alive, 'commented Paulo Follmann father while he strained waiting for more news from the Colombian hospital where is his son.

Two black boxes have been recovered at the site of the crash. They are examined. The owner of the unit, company LAMIA has sent experts. The wreckage were last night guarded by soldiers. Once the light is, experts go to work.

What kind of club is Armenian Chapeco?