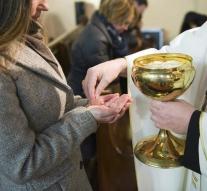 vatican city - Gluten-free bread is not allowed at the Supper in the Catholic Church. The Vatican recalled a letter sent to all bishops on Saturday. Hostels that do not contain gluten are for the church 'invalid matter', so it became known on Sunday. Hosties must be made of unsweetened bread and consist of pure wheat flour.

For people with celiac disease, a metabolic disease caused by gluten intolerance, an exception may be made. These churchgoers may eat a cough with less gluten. However, gluten-free is not allowed. The cough must contain no ingredients other than wheat.

In some supermarkets and on the Internet, gluten-free hostels are sold. With the letter, Pope Francis wants to counter the use of these hostages.