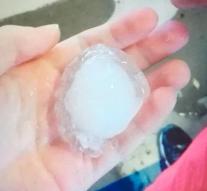 the hague - Dozens of Dutch holidaymakers who camp in Lake Garda in Italy have suffered damage by a fiery hail. At the ANWB alarm center, about 40 reports have been received since Wednesday's emergency weather, a spokeswoman told Thursday. Many of these reports are about broken windows of cars and caravans.

'It has been very heavy. People were talking about hailstones as big as golf balls, 'said the spokeswoman. 'We are now discovering what assistance is needed. Local noise damage companies get busy. '

The hail stalls fell on the south side of the lake according to the ANWB. There are no messages about injured.