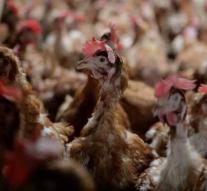 - Poultry farmers affected by the fipronil affair are given a financial backing. In Barneveld, funds will be collected in October for these farmers. The plans are not yet concrete, but it looks like there is a glass house in the center.

'There must be several performances,' says local baker Jaap van der Veer against Omroep Gelderland. Earlier, Van der Veer said he can not be without baking as a baker and is now involved in the suffering of his deputies. 'Our chicken farmers need to help us and we're going to think of a nice action. '