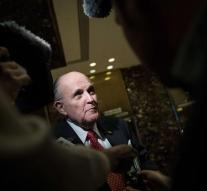 - Rudy Giuliani is not a foreign minister under Donald Trump. The 72-year-old politician, who's known as the former mayor of New York, has indicated that he does not aspire to the post. He has no interest in other positions in government trumps.

' Rudy would have been an outstanding member of the Cabinet in various roles, but I respect and understand his reasons to stay in the private sector, '' said the president-elect Friday in a statement. Giuliani continues as vice chairman of the transition team be closely involved in the formation of the new government. But then he wants to continue with his own law firm and consultancy.