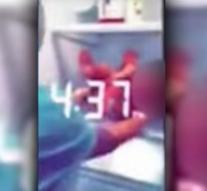 - Two American teens have put a crying baby in the fridge while waking up and closing the door. The police saw the images of the incident on social media and interviews.

One of the teens is the cousin of the baby. She and her girlfriend were just with the crying child while the mother took a shower. One of the girls picked up the crying baby and put it in the fridge. The other started filming and placed the images on Snapchat.

The movie shows how the girl opens the fridge, lays the crying baby in it and smiles closes the door. As soon as they open the refrigerator, it is heard how the child is still upset, and it is even harder to cry.

The mother of the family is angry, but also shows understanding for the young girls. Although she does not want her niece or her girlfriends to come close to her baby, she thinks that it's a crazy joke. 'I know she would never hurt my daughter and that was not her intention. I think it was just crazy, folly. '

The teens have been arrested and have already appeared before the children's court. Tuesday they have to appear again.