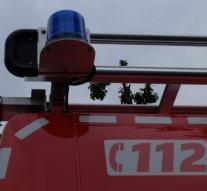 liege - After a fire in a house in the Belgian Soumagne are the remains of two girls were found. The fire was not the cause of death, according to Justice in Liege, who thinks the fire was ignited.

The fire erupted Friday morning south of the village Soumagne in the province. The newspaper La Dernière Heure reported that the girls were eight and eleven years old. The father was seriously injured taken to hospital. The mother is still missing.