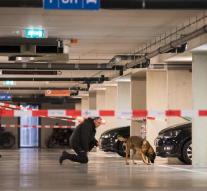 amsterdam - The 30-year-old girlfriend of the man who was shot Saturday afternoon in a car park in Amsterdam, is conscious and out of danger. That left the police Monday morning. The woman was seriously injured when the car they were sitting with their two-year-old daughter, came under fire.

The child was unharmed. The motive for the shooting incident in the parking garage at the Queen Wilhelmina Square West is still unclear. Her partner, 31-year-old Djordy Latumahina, a familiar face in the Amsterdam nightlife, died on the spot. The family is not known to the police.

The investigation will examine whether there is a connection between the attack and a burned car was found at the nearby Wittgensteinlaan and possibly served as a getaway car. Hoofddorp was later found an empty car that may be used in the flight.