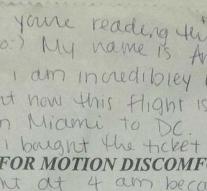 washington - A passenger from an American airplane aired her heart in a declaration of love on a spit bag. The outcome keeps the airline crew and social media users in their grip.

The girl was 'bored' on her flight to Washington and therefore wrote a declaration of love to her best friend, who knew nothing. She did that on a spit bag. She wrote, among other things, that she wants to confess her boyfriend on arrival that she is crazy about him. In order to remedy the nerves, she aired her heart in a tale on a bag. 'So I bought a ticket because I have a crush on my best friend. I am going to surprise him at the airport during his transfer (in D.C.). '