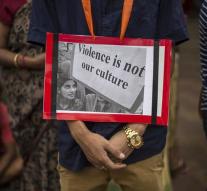 sikar - An Indian teenager is in critical condition since she was forced into an abortion. According to the BBC, the eighteen-year-old girl was sexually abused by two staff members of her school in the northern state of Rajasthan for months.

Doctors told the BBC that the teenager has suffered brain damage. She lost consciousness after the police had undergone an abortion in a private clinic.

In India, sexual abuse is a major problem, especially because rape victims do not always report to the police because there is little faith in the packet and actual punishment of perpetrators.

The director of her school and a teacher have been arrested. The authorities also look at the role played by the hospital.

The alleged abuse led to great commotion in the local community. Protesters gathered outside the school in Sikar on Tuesday, which was closed by the authorities. Investigators have not yet been able to record a statement from the teenager who is out of consciousness.