Home / World / Girl (8) provides its own life to save sister 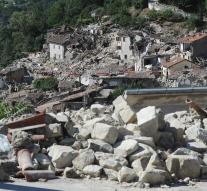 - An eight year old girl has her own life after the earthquake in Italy in order to save that of her little sister. When their home in the devastated dorpe Pescara del Tronto collapsed, she threw herself on her sister's four to protect her.

Hours after the earthquake, rescue workers found the two girls, reports the Daily Mail. The older girl was already deceased.

The grandmother of the two girls told the newspaper that the heroism of the older girl had ensured that her sister is without serious injuries had come off. 'Giulia died to save her sister. She lay on top of her, that's the only reason she's still alive, 'said Angela Cafini.


The youngest girl, Giorgia, was taken to hospital. 'It's a miracle she's still alive, but I'm torn by emotions. I lost a granddaughter and the other is still alive. '

The two girls were with their parents to visit the grandmother when the earthquake. Parents also were injured and are in hospital. The grandmother herself slept in a different house and was not hurt.

Grandmother Angela had to wait for hours outside the village for news of her family. 'We had to leave the village because it was too unsafe. We could only sit and wait. Until seven o'clock in the evening we received the news about the girls. '


The death toll from the earthquake has now risen to 247. In the same village was also a 10-year-old girl from under the rubble alive.