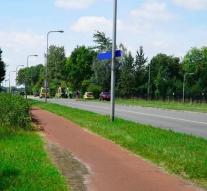 deventer - A 7-year-old girl from Deventer was injured on Sunday morning in a one-sided accident with a carriage. The girl was sitting with her parents in the carriage drawn by a pony.

Due to unknown cause, the carriage drove off the road and stopped at the bottom of the Talud. The occupants were driven out of the carriage.

The girl, who was immediately arrested by bystanders, was transported to the hospital in a worrying state by a trauma helicopter. Her father walked up with a broken arm. The mother remained unharmed.

An investigation has been made following the accident.