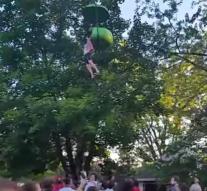 new york - The nightmare of many became reality for a 14-year-old girl when she fell out of a trolley in a state park in the state of New York. She hung for a minute under the cart and was eventually caught by the crowd.

It is not clear how the girl could fall from the Sky Ride trolley. Six Flags Great Escape theme park says that it does not seem that there is anything wrong with the attraction, but does investigate. The Sky Ride will be closed for the time being.