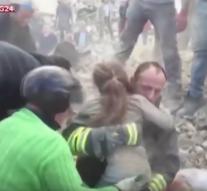 - Seventeen hours after the devastating earthquake in Italy is in the village of Pescara del Tronto a girl of 10 extracted alive from the rubble. Rescue dramatic cropped images.

The girl was sitting all that time upside down in the rubble. The images show how rescue workers found the legs of the girl. 'I hear something here. Quiet, quiet! 'One of them shouts.


He urges to release the girl herself. 'Giulia Come on, come on! Watch your head, 'he says. If the girl is finally freed it sounds applause and cheers.

According to the Daily Mail ran the girl was not seriously injured.

The death toll from the earthquake has risen to 247 tonight.


Rescuers are very night spent to get people from the rubble. By the quake, thousands of people lost their homes. The rescue services had set up tent camps in order to be able to spend the night.

'Ninety percent of the victims that we get is unfortunately deceased from the rubble, says volunteer Christian Bianchetti against the newspaper. 'But some make it, and why we do it.' Along with dozens of others he worked in Amatrice all night.

However, it is a race against time, because the chance that someone can survive much longer under the debris is small. It is therefore expected that the earthquake death toll will rise further.

Many victims are children, the Italian health minister Beatrice Lorenzin said on its visit to the affected area. In the area have many Romans a second home. In August attract many city dwellers to their summer houses with their children.