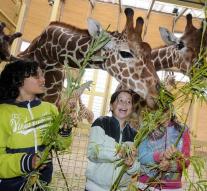 rotterdam - Rotterdam Zoo this week said goodbye giraffe Tipsy. With her 27 years Tipsy was the oldest reticulated giraffe in Europe.

In consultation with the vet decided to euthanize her, reports the zoo. She had pain in her joints and after the administration of painkillers she continued to suffer. From section showed that there was much worn cartilage in the joints.

To our knowledge Tipsy was the oldest reticulated giraffe in Europe. She was born in Czech Republic in 1989 and two years later brought to Rotterdam. In the wild, giraffes usually not older than 20 years.

Parts of Tipsy are prepared for education, such as the skull and cervical vertebrae.