Home / World / Giraffe is in the oppression by men 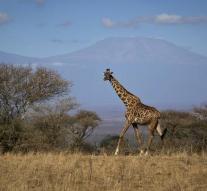 cancun - The number of giraffes in nature in recent years so drastically reduced that the species are now 'vulnerable' has been identified. Nature Organization IUCN has the giraffe put on the so-called Red List.

In thirty years, the population of the tallest land animal in the world with nearly 40 percent has shrunk: from about 160 000 in 1985 to over 97 000 last year, as did the organization announced Thursday at a conference on biodiversity in Mexico Cancun.

Giraffes occur naturally only in Africa. The species is undermined by illegal hunting and loss of habitat by agriculture and mining.

The category of 'vulnerable', where giraffes now belong, is a category worse than 'sensitive', but one step below 'endangered.'

The new list includes for the first time not only animals but also wild relatives of food crops. Conservation of these species is important because they may contain genetic material might be very useful. Sometimes it turns a particular variant of a wild crop more resistant to disease or drought than the variant that massively growing people.

Among the endangered crop species are wild varieties of asparagus, sunflower and chickpea. For Kalimantan mango it is already too late: it is extinct.