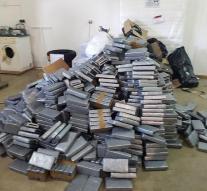 noumea - On the coast of New Caledonia, the French navy has intercepted a yacht with a huge amount of drugs aboard. A record of 1.5 tonnes of cocaine was hidden in the hull, worth $ 322 million (EUR 271 million) and was on its way to Australia.

Eventually four crew members were arrested, the Australian Criminal Intelligence Commission (ACIC) reported to ABC News. It would be for Lithuanians and observers. The shipping of the cocaine would be organized by a South American drug syndicate.

'Congratulations to the French Navy and the National Police for their commitment, intercepting a record to cocaine,' said Col Blanch of ACIC.

The hunt is further investigated in Nouméa, the capital of New Caledonia.