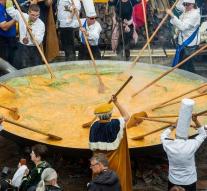 malmédy - The crisis with the eggs infested with fipronil has not prevented the Belgian village of Malmédy from baking a huge omelet.

The local department of the 'Brotherhood of the Giant Omelet' held a party. About a thousand people attended the annual tradition on Tuesday.

In a 4 meter wide pan, 6500 eggs were prepared with 25 kilos of bacon, 50 liters of oil and the necessary chives of chives. That is what Brotherhood president Bénédicte Mathy told Belga press office.

The eggs used are reportedly thoroughly controlled. Nevertheless, the number of visitors was lower than in other years. According to the organization the egg crisis indeed played a role, but also played the bad weather. It was raining lightly when the omelet was distributed to bystanders in the eastern Belgian town.

The omelet brotherhood has branches in, among others, France, the US, Canada and Argentina.