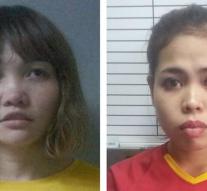 kuala lumpur - On a T-shirt of one of two women suspected of killing the half-brother of North Korean leader Kim Jung-un, traces of the nerve gas were VX. That said a chemist Thursday during the lawsuit in Malaysia against them, the Malaysian newspaper Astro Awani reported.

The two women, 29-year-old Siti Aishah and 25-year-old Vietnamese Doan Thi Huong, have been sentenced to murder Kim Jong Nam since Monday. Aishah's shirt has found traces of poison gas. They would have killed Kim Jongnam at Kuala Lumpur Airport on February 13th. They blamed the highly toxic NXV VX on his face. The suspicion is that North Korea is behind the murder.

The women say to be innocent. They've been paying for their act for a long time and that they assumed they were joining a joke for a reality TV show.

The two women can get the death penalty if they are convicted.

Kim Jong-nam was the half-brother of North Korean president Kim Jong-un and the oldest son of former leader Kim Jong-il (1941-2011) from a previous marriage.