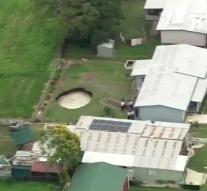 - An Australian older couple got the shock of his life when suddenly there was a huge hole in their backyard. The home of Lyn and Ray McKay, however, would run no danger of being swallowed up.

The hole of about six to eight meter is filled with water and is clearly visible on aerial images that broadcast the Australian television. It would be caused by a mine shaft collapsed under the garden.

Engineers are confident that the rest of the neighborhood is safe. 'It gets worse in the coming hours. The mine shaft is about one hundred meters deep, but there is no reason to panic. We take all measures so that Lyn and Ray can return home, 'the mayor of the city Ipswitch told news agency AAP.