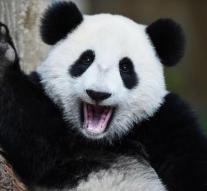 - Good news from the animal world: the giant is no longer in the endangered species. The World Wildlife Fund (WWF) has announced that it is removed from the Red List the animal and now has a status of 'vulnerable'.

In 2004 there were a grand total of 1864 giant pandas. In ten years, that number increased by 17 percent. 'Knowing that the giant panda is now a step further from extinction, is a great moment for all animal lovers and everyone who is committed to preserving the natural fauna' said Marco Lambertini WWF.

'The recovery of the giant panda shows that if the science, politics and local communities work together, we can save animals in the wild and thus enhance biodiversity,' says Lambertini.