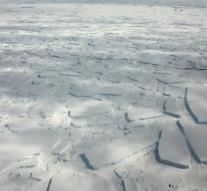 bremerhaven - A giant iceberg, twice the size of Luxembourg, has been broken down from the ice sheet in Antarctica, shown by satellite imagery. The iceberg now drives north, reported the German Alfred Wegener Institute for Pool and Sea Research Wednesday.

It will probably take two to three years before the ice mass is melted. It is 175 kilometers long and a width to some 50 kilometers one of the largest icebergs that scientists have seen in the past three decades. The 6000 square kilometers of ice cube is not currently a danger to people.