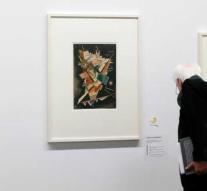 ghent - In order to clarify the authenticity of Russian art works, Belgian investigative authorities have searched the Museum of Fine Arts (MSK) in Ghent. Police and judicial authorities suspect that the suspended director Catherine de Zegher has withheld documents that could shed light on the authenticity of the so-called Toporovsky collection, report Flemish media.

Computers are sealed and documents requested. The director has claimed that the works have been carefully examined and the owner has proven the provenance with certificates.

In January, doubts arose about the authenticity of 26 loans from avant-garde artists such as Malevich and Kandinsky. An announced investigation was stopped when the owner, the Dieleghem Foundation of Igor and Olga Toporovski, withdrew the works.

Then it was decided that Ernst \u0026 amp; Young will investigate whether the museum has followed the guidelines on loan. Until there is clarity, De Zegher remains non-active.