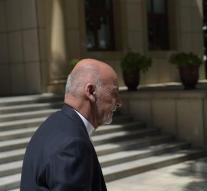 cabul - Pakistan has started a silent war against Afghanistan. That is what President Ashraf Ghani said in Kabul on Tuesday. According to the Afghan president, the neighboring country with its repeated bombings in Kabul has declared its country secretly the war last week.

Last week there was a heavy bomb attack in the center of Kabul. More than 150 people died. The attack is the deadliest since 2001 when the Taliban were chased away. The Afghan intelligence service still assumes that the militant Afghan Haqqani network is behind the attack and has been helped by the Pakistani secret service ISI. Saturday there were explosions in the city again.

In a reaction, the Pakistani army called Ghani's allegations 'unfounded'. Pakistan continues to hold on with the attacks.