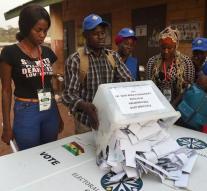 accra - The opposition in Ghana is convinced that she has achieved in the parliamentary elections held Wednesday a huge victory. But the official results late so long in coming that an opposition leader Nana Akufo-Addo immediately suspected electoral fraud.

The leader of the NPP said the Election Commission is trying to make its estimated profit of 47 seats undone.

The Ghanaian voters were busy, because on Wednesday also had to choose a president. Akufo-Addo (72) also claims here profit, but it does its opponents too. His opponent is John Mahama (58), the incumbent president. Akufo-Adda would stand at 49.7 percent of the vote, Mahama at 48.6. In this case also shows the official results to the displeasure of the opposition coming.

The commission says to disclose all results in the course of Thursday.