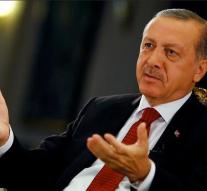 For the pro-Kurdish HDP Erdogan, however, makes an exception, the Turkish newspaper Cumhuriyet reported on the authority of Erdogan's lawyer.

Erdogan promised after the failed coup that he would abandon the litigation to celebrate the unity of the Turkish people. Monday, he withdrew the charges against Kemal Kılıçdaroğlu of the Kemalist CHP, and Devlet Bahçeli of the nationalist MHP officially, the court let Ankara know according to state news agency Anadolu.