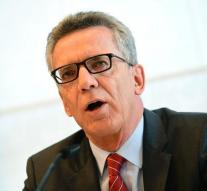 - German Interior Minister Thomas de Maizière wants to track down terror suspects in stations and airports with facial recognition software.,, There is a possibility to shoot someone and find out with facial recognition software on the Internet or it is a celebrity or a politician. I want such a system to the video cameras at airports and railway stations, '' said the CDU politician Sunday.

If a defendant appears on the scene, the system must show, said the minister.,, The government must do technically what is lawful, '' he added. The federal minister wants not only more cameras, but also more high-tech to track down terror suspects.

The German Green group calls the plans of the Minister and exaggerated,, half-baked '. Moreover, the use of face recognition software involves enormous costs for equipment and personnel, said the spokesman of the Greens, Konstantin von Notz.


Von Notz also believes that such a system is justified only in very risky situations, for example,, if there is a concrete indication of a planned attack on an airport. '