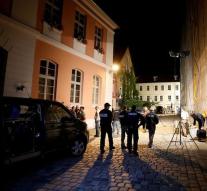 - The German authorities were warned that if they tried to turn the perpetrator of the attack in Ansbach, he possibly would take a spectacular,, '' suicide attempt. It reports the BBC program Newsnight on Friday.

The Syrian Mohammed Daleel crossed in 2013, the border between Turkey and Bulgaria over and ended up in Germany. He was until January of this year under treatment at a trauma specialist in the town of Lindau. In its assessment psychologist Axel von Maltitz wrote that Daleel had,, extremist mind '' and that expansion could lead to a dramatic suicide attempt.

Ten days before Daleel committed the attack, he was told that he had to return to Bulgaria. The EU Dublin Regulation stipulates that the country where a migrant is applying as first asylum or her case should be treated.