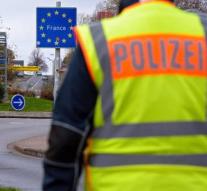 - Germany wants to extend border controls in the south of the country, although Brussels which has rejected so far. That German media reported Sunday. Germany argued in the extra border security due to the large influx of refugees.

The EU believes that the temporary controls should be and has given permission for additional monitoring on the border between Germany and Austria in Bavaria to February. Better controls on the external borders of the EU to make internal controls superfluous Brussels.

But Bavaria and the German Government to extend the checks until after the parliamentary elections in September. If the EU wants to go out with it, Berlin wants to do on their own according to Welt am Sonntag.