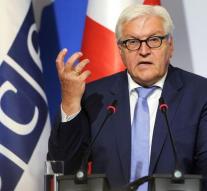 - The Turkish Government must regard to Germany every effort Wednesday declared a state of emergency to be as short as possible. Foreign Minister Frank-Walter Steinmeier urges Turkey proportionality and respect for the rule of law. He warns that dismemberment and weakening Turkey lurk.

Erdogan had Wednesday in advance said that European countries have no right to criticize the state of emergency. Steinmeier pulls so nothing to it.,, Only provable involvement in illegal acts, not a suspected political affiliation, should lead to action by the government, '' said the German minister.

The state of emergency in Turkey gives the government three months sweeping powers. Thus, freedom of the press and freedom of assembly can be limited or become inoperative. Erdogan showed his goal, there are no misunderstandings. He is among more,, the virus' from the ranks of the army to remove after the failed coup last week.


Earlier, Erdogan said the coup attempt,, a godsend. '' The authorities immediately opened the hunt for supporters of the Islamic scholar Fethullah Gulen, according to the president, the instigator of the military action.