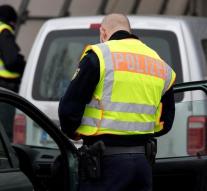 valletta - Germany wants to keep longer controls at its borders in view of terrorist threats. Now the migrant crisis is still the legal basis for controls at the border with Austria.

'In Germany, however, we are faced with an extraordinary security situation, especially in this half-year, and especially after the attack (in Berlin),' said Interior Minister Thomas de Maiziere on Thursday in Valletta, where he has meetings with counterparts from the European Union.

In the Schengen area have been abolished border controls. Under special circumstances, they may be held anyway. As migrant crisis for Germany, Austria, Denmark, Sweden and Norway had reason to introduce temporary controls again. They can be renewed every three months by the European Commission. Wed Yet the EU agreed that the inspections to continue until mid-May.

By like France to invoke terror threat, Germany makes it easier to extend the controls. According to German media wants De Maizière they maintain until the end of the year.