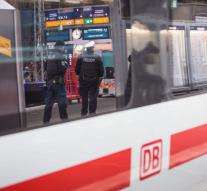 The police at the border is extra attentive and for the night from Saturday to Sunday, equipped with machine guns and bulletproof vests. Also there is a helicopter on standby, reported the Interior Ministry. There are also hidden,null, measures '' taken. There is no concrete evidence of imminent terrorist attacks.

Earlier it was determined that additional airports and train stations are protected in Germany.